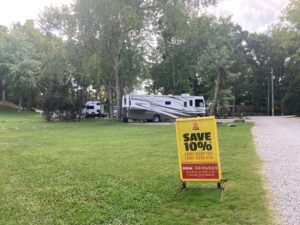 Kampgrounds of America (KOA) is the world’s largest system of privately held campgrounds with more than 500 locations across the United States and Canada. Their huge number of parks means that most RVers will stay at a KOA at some point in their travels. However, many KOA campgrounds charge a pretty penny for an RV campsite. Read on for our complete guide to KOA Rewards to learn how to get the best deal on KOA campgrounds.

KOA Rewards, also known as the KOA Value Kard, is a loyalty program for RV campers. The main benefit of joining KOA rewards is receiving a 10% discount on nightly rates at KOA campgrounds across North America. Since KOA RV parks do not accept other RV membership discounts, such as Good Sam or Passport America, KOA Rewards is the only way to obtain a reduced rate at their campgrounds.

There are no promo codes available to purchase KOA Rewards. All new members must pay the full $33 annual fee to join. However, there is a way to save on your KOA Rewards membership in the future.

The way to save on your membership is to utilize it. Members earn loyalty points for every night they camp at a KOA. Nightly points range from 600 to 1625 depending on the price paid and the number of points already accumulated. If you earn 20,000 loyalty points in one year, KOA will renew your rewards membership for FREE.

KOA Rewards campers earn points for each night of camping at a KOA. Points are redeemable for dollars off your future KOA stays. Nightly points range from 600 to 1625 depending on the price paid and the number of points already accumulated. Reward points do not expire as long as your loyalty account is active. The cash benefit per points is detailed below. Campers also earn 250 additional rewards points for making their KOA reservation online through the KOA website.

In addition to earning free stays with rewards points, every KOA Rewards member is entitled to one free night of camping. Each year, the company hosts a KOA Rewards Weekend. During this weekend, campers who book a campsite for Friday night can stay Saturday night for free. The free camping weekend is typically scheduled for early to mid September, after Labor Day weekend.

Members who reach 20,000 loyalty points within a calendar year automatically receive a free renewal of their KOA Rewards membership. The free renewal applies for every year a member accumulates 20,000 points, so many campers only pay for their first year of membership.

For VIP campers, KOA will waive the standard $10 cancellation fee for a tent or RV site as long as your call to cancel your reservation more than 48 hours in advance.

Friends camping with KOA VIP members also receive 10% off the campsite rate for up to four nights. The member must be camping at the same KOA at the same time for the discount to apply.

While KOA offers a great rewards program, there are some limitations on earning point and redeeming benefits. The following are the rules for utilizing your rewards membership.

Since the 10% discount only applies to nightly rates, RVers who book a KOA stay with a discounted weekly or monthly rate will not receive any additional rewards discounts. Campers who stay at a KOA for more than 27 consecutive nights will also only receive 75 rewards points per day.

If the KOA Rewards account is purchased at a campground upon registration, then the maximum savings benefit for the stay (including all nights) shall be equal to the annual account fee of $33. Buy your membership online when reserving your first KOA campsite to avoid this maximum savings limitation.

A maximum of $50 (or 25,000 reward points) may be redeemed for a single stay. Rewards points cannot be applied at booking; they must be redeemed at check-in. To redeem them, simply let the front desk know upon arrival that you want to use your reward points for this stay.

In summary, I strongly recommend that all RVers sign-up for a KOA Rewards account when they make their first KOA camping reservation. The affordable membership is an easy way to save money on RV camping fees.

In addition to a KOA membership, we also recommend considering other RV clubs. To determine whether a membership is worthwhile for your family, calculate how many nights per year you would need to stay at discounted RV parks in order to break even on your investment. Also, consider the annual dues and whether or not the membership can be resold if you are not using it. To maximize your savings, read about all of the RV clubs in our complete guide to RV camping memberships.